At around 08:30 a call came through for a missing hiker that was located on Platteklip Gorge. There were no operators able to respond and HAMNET WC was assisting on the Lions Journey for Sight & Service Cycle race. After checking with control Grant (ZS1GS) was released from his function to respond to the call.

A team of 5 rescue personnel ascended the mountain to assess the situation. Due to the high winds Skymed was not able to fly and the cable cars were also unable to run. After the assessment of the paramedic who confirmed that the patient was deceased it was decided that the patient should be carried down the path. A similar carry out, a few years ago, took almost 30 field operators around 8 hours.

On arrival Grant requested a sitrep and took over the control of Metro1. As more carriers arrived they were dispatched up the mountain to assist with the daunting task of carrying the patient down. Only around 15 carriers responded but the task went quicker than expectded.

Ian (ZS1OSK) was also released from his duties at the J4SnS race and joined the operation. Ian was tasked to be positioned at the junction of the contour path and the Platteklip Gorge path so that he could dissuade hikers from using the path up the mountain. The wind was bad and along with the rescue it was not advisable for the public to be on the mountain. 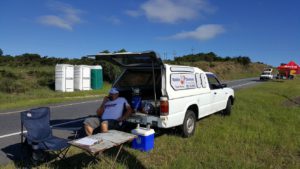 At around 20:10 on 13 January, a call was put out for a party of hikers that were stranded on top of Table Mountain. Due to the weather conditions the cable car had suspended operations and the hikers were stranded without lights and warm clothing. A team was sent to asses them while they slowly made their way down. Ian Stanbridge (ZS1OSK) responded to assist with communications from Metro1. The patients were reached and assessed where they were treated for hypothermia and assisted further down the mountain.

The stand down was given around 22:00 after a debriefing and the patients went on their way in private transport.

Members from HAMNET Western Cape were involved with a number of rescues over the festive period.

On the 1 January 2017, Matt Feinstein (ZS1MTF) responded to a call for a dehydrated patient on Platteklip Gorge. Matt secured the landing zone (LZ) at Kloofnek parking to allow Skymed 1 to operate in the area. The patient was extracted and taken to hospital.

On the 4 January, Jason Codd (ZS1ZW) and Phil Van Den Bossche (ZS1VCC), responded to a call for a patient that had fallen in the Elsie Peak area. This is located around the Fishoek are of Cape Town. A suitable LZ was sought and it was decide to hold this at the Fishoek Provincial Hospital as no other suitable area could be found. The call was only received quite late and the rescue crew had to operate quickly as the light was fading. It was decided to extract the patient with a screamer suit to allow for faster operations. At the same time a call for a patient in difficulty on Platteklip Gorge was received and Liz Southey (ZS1XS), Ian Stainbridge (ZS1OSK) and myself (ZS1GS) responded. This was Ian’s first call so we welcome him to the list of responders. The patient was walked out and brought down by the cable car and was taken away with private transport.

On the 8 January 2017, Ian (ZS1OSK) responded on his own to a call for assistance with a party of 5 requiring help. The party was made up of 2 adults and 3 children. They were mobile but were out of water and were uninjured. Ian manned Metro 1 at the Jeep Track and by sunset the party were safe off the mountain.

I wish to thank all the members involved throughout out the entire holiday period for their support and efforts. It is appreciated by myself and the management of Metro.

At around 20:30 a call came in for a 20 year old female who was overdue in the Newlands Forest area. I (Grant ZS1GS) responded for logistical support and arrived on scene at 21:00. The female and her family were visiting from Gauteng and she had spent the afternoon alone hiking in the area. She was in cellular contact with her mom and had sent her an image of her location but did not arrive back at the expected time. While a search manager was interviewing the mother of the patient, a second call for a male lost on the Houtbay side came through. This meant that the teams that had gathered were split and some sent to Houtbay while some remained at Newlands forest to search for the missing lady.

The Houtbay call was on Kabonkelberg and the patient had comms via cell phone with the incident commander. He was advised to reserve the battery life for when help was closer so that he could be located easier. Phil Van Den Bossche (ZS1VCC) and Jason Codd (ZS1ZW) were deployed as logistic operators to assist with this rescue.

In the meantime 5 teams of around three people each were sent through the forest to locate the missing lady. From the image that was sent to her mother it appeared that she was at the contour path 2 hours before her last contact with her mother. Further information from a trail runner showed that she was higher than expected and a team was rerouted to the area and ultimately found her shaken and injured but still able to walk herself out most of the way home but she was piggy-backed out the last stretch, which happened via Tafelberg Road.  She was  transported back to Newlands Forest where she was reunited with her family.

At around the same time the patient on Kabonkelberg was reached and he too was in a precarious situation and required the assistance of technical rescuers to get him to safety. He was brought down from the mountain and all parties stood down around 05:00.

These two incidents could have turned out with tragic consequences as the weather was becoming worse and during the night some rain was experienced. Thanks to everyone involved.

At around 08:15 a call came through for a patient that had fallen 20-30 meters on Lionshead. Matt Feinstein (ZS1MTF) and Grant Southey (ZS1GS) responded as LZ operators and reported to Kloofnek. Fortunately the parking had not yet filled up and was still suitable for use as a landing zone. Matt secured the LZ with the help of SANPark Rangers.

The rescue went according to plan and no notable issues arose. The patient suffered back and rib injuries but was fortunate in that he did not have a vertical fall but rather slid 20-30meters and was able to grasp at vegetation to slow the fall.

Saturday 12 November was the turn of this years 6th group of grade 9 scholars from Somerset College to hike the Landroskloof section of the annual Somerset Trek.  Each year, members of the HH section of the Mountain Club of South Africa accompany the learners on this section of their adventure.  On Saturday, Johann Wiid ZS1JHW, was one of the two rescue team members accompanying the group.

The group departed the MCSA Johnson Hut at around 7am in cool conditions.  About two and a half hours into the hike, one of the learners sustained a knee injury that prevented her from continuing or turning back.  The standard rescue plan was immediately activated by the two rescuers with the group.  Luckily the group was still about 300m below the cloud level and so, after consultation with the EMS rescue manager on duty, the AMS Skymed rescue helicopter was recalled from and air-sea rescue exercise in Melkbosstrand and dispatched to the scene.  Paul ZS1V responded to the WSAR callout sent by Johann ZS1JM, and secured a landing zone for the helicopter near the gates of the Vergelegen farm.

A technical rescuer and a paramedic were hoisted down to the patient.  After consultation between Paul and Skymed, the LZ was moved to the Helderberg Nature Reserve.  This is further away from the scene, but more familiar to the helicopter crew.

Since the weather was worsening, the remainder of the group of 20 hikers turned around and proceeded back down to the Johnson Hut.  Unfortunately, a second hiker suffered an ankle injury on the way back down.  After the first patient was extracted, the technical rescuer and paramedic were relocated lower down the kloof to prepare the second casualty for extraction.

The second patient, paramedic and technical rescuer were all subsequently extracted to the Helderberg Nature Reserve and a waiting ambulance transported the casualties to hospital.  Standdown at 13.00.