On Sunday the 19th February 2107, Hamnet Gauteng South provided services to the annual Dischem Ride for Sight race held from the Boksburg stadium.

This year there were 31 operators manning 10 sweep vehicles, 5 water tables and 4 quantum busses with trailers to collect cyclists that had retired from the race. All driven by Hamnet members. The balance of the team set up, manned and operated the JOCC together with Helivac and the Road Rangers

To start with, there were so many injuries and accidents early in the race that ambulances became scarce. At one incident there were 3 cyclists injured and eventually 2 were transported in one ambulance and the 3rd in a second ambulance. The other 3 responded to other incidents leaving the race with minimal available ambulances with incidents pilling up. A back up plan with the service provider is that they have a service level agreement with private companies like ER24 and Emergimed that if they need more ambulances, they call them in. This was done with 3 more ambulances being brought in and diving into the thick of it. Unfortunately, coming in out the cold, they did not know the route and there was no radio communications with them except by phone. Getting them to scenes was hard.

Another issue was the marshals / metro on the short route, made a complete error and directed arguably 80% of the short route race down the wrong road!!! Obviously, on that route, there were no marshals, and to add to the issues, they turned about 4km’s before their 1st water point, therefore missing out on their refreshment refills! Where they cyclists re-joined the race, they entered after WP4, so effectively; they did not pass one single water point during their slightly shortened race. Fortunately Shane (ZS6ZSB) who started sweeping that area noticed the error and called it in. This incident literally drew in 5 of our members to manage the incident. The team could not rectify it as they would never get the cyclists back on the route. So they completed a slightly shortened race, however, this also affected WP 6 at the stadium.

At the same time, water point 1 was preparing to close down. Normally the excess refreshments in the WP1 truck are then sent to water point 4 who are at the same time getting desperate for a top up. Believe it or not, the truck would not start!!! To complicate matters, the stadium water point ran out of water and the next thing, Chris (ZS6COG) at water point 3 started asking for additional drinks!!! If anyone was monitoring, they would have heard all the discussion that took place. Suffice to say, that one truck at WP1 threw a very big spanner in the works. The water running out at the stadium water point was arguably a direct result of the short race missing their two water stops and probably being very thirsty for water at the end.

For the first time known, the cut off at WP3 was enforced by the JOCC as the temperatures were very high and again people dropping out. On the radio, a consistent chatter was heard from the busses reporting they were full and returning to base. Again, something completely new. Unfortunately we have 3 members with PDP’s and 4 busses. Hopefully next year we will have 4 PDP’s??? But this did not stop the team putting Hamnet guys in the 4th buss with the contracted driver.

Overall however, the race went exceptionally well in the eyes of the organisers who were ecstatic the way every had gone. In total there were 5700 cyclists who all had a great day out by the look of it.

The team was obviously tired from being up at 03h00 in the morning and returned home for a well-earned break.

Early January 2017 the Gauteng South team invited the Vaal team to join in the operation for this event.  After initial arrangements, ZS6GLN, ZS6LMG, ZS6PAJ and ZS4PR met with the organisers of the event, as well as the Midvaal traffic and fire departments.   The function and capabilities of HAMNET was highlighted and the logistic arrangements were set.

The afternoon of 28 January was where the two HAMNET teams first came together.  The first initial planning arrangements were to set up the JOC, the two UHF repeaters, testing the VHF repeater ZS6VTB, and assist the organisers with WIFI and internet access.  In this regard it was clear from the go that the Vaal and the Gauteng South teams clicked extremely well and immediately worked together in a most efficient way.

The lead vehicles of the race organisers arrived on time and the APRS tracking units were also installed.  Having these many capable radio amateurs on hand to get the communications set up is proof of professionalism and respect towards the greater amateur radio directives of HAMNET.

By nightfall every task set out was completed and the APRS trackers were reporting positively.

The Vaal team decided to ensure that the fellowship and tummies will receive good support.  Saturday evening the braai allowed the teams to get to know each other even better, and Glynn made use of the opportunity to brief all on the task that lay ahead for the next day.

At 3 am Sunday morning the Vaal team was up and started preparing fresh hotdogs for everyone as breakfast.  4:30 everyone was up and busy with preparation of handhelds and radio equipment.  The ambulances of St. John Ambulance and ER24 were also equipped with radios and APRS trackers.  By 5 am the organisers had their briefing and by 5:20 the HAMNET team had theirs.

Everyone was ready to do their part.  Vaal saw the opportunity to learn from the Gauteng guys, and again the interaction between all the members was notably positive.

The race started on time and during the day the communications was well handled.  When an accident or incident occurred the message was clear and to the point effectively relayed to the JOC.  In the JOC there was represented an organiser, HAMNET, both ambulance services, traffic and fire department personnel.

Some areas had lack of coverage, but this was corrected fast by the re arrangement of operators at various points.  Managing over 3600 cyclists, the roving and lead and sweep vehicles were done in a positive and effective way.

By 1 pm the last of the cyclists arrived back at the raceway.  These allowed HAMNET to takedown and collect the hardware and equipment.

For lunch the Vaal team prepared scrumptious boerewors rolls with special sauce.  The HAMNET team were fed and then the project was closed.

A lot of positive feedback was received from the organisers and HAMNET in this region left a positive footprint on the community of Midvaal and Meyerton. 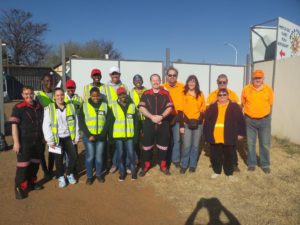 The world is a small place they say, and I tend to agree. It all started last year 2015 when Helen from Curves Beyerspark requested assistance from a handful of Amateurs via Martin (ZS6TMN) to help with a fun walk around the dam to raise funds for their charity as well as to promote a healthy lifestyle among women. Amateur radio operators became known to Helen via Hamnet member, Mina, (ZS6MNT), who at the time was an active member of the Curves Beyerspark Women’s Gymnasium. The fun walk around the dam was a big success, with members from Hamnet assisting and ensuring the safety of all participants.

It was with little surprise when Helen once again called on the team this year, and again requested the assistance from the Hams. This year however, they were planning on making it even bigger than before, by involving the local SPCA to raise funds for their spay clinic and also changing the venue of the walk.

Taking over from Martin (ZS6TMN). Johan (ZS6DMX) as well as Philip (ZS6PAJ) took charge and got involved with the planning and organising. Philip attended the final planning meeting together with Mr. Barnard (Barries) from Boksburg EMPD, playing a crucial role in making sure that the right plans were made to ensure a smooth and incident free day for all. Philip also oversaw the planning on the EMS side, to make sure that any medical incidents could be attended to if any happened.

Johan sent a request to local Hamnet members while Philip (who also took on the responsibility of being in charge of EMS for the day) organised students of Queens High school who were to support him on the medical response side of the event.

Leon (ZS6LMG) was asked to draw up a simple comms plan for the day and to register the event with ICASA. Comms where to take place on 145.425 between hams and 433.625 between EMS volunteers.

Martin (ZS6TMN) was put in charge to run the JOCC from his Vito Bus, as it is equipped with all radio equipment needed for the operation. 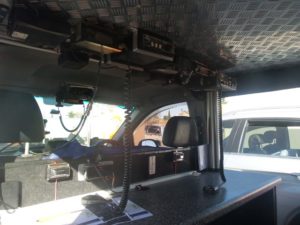 The day started not too early, at 7:30 with Johan and Philip arriving at the Boa Vida Cafe in Boksburg with his crew of students, well branded and visible, ready for action. The other Hamnet members started arriving at about 8:00am.

Johan started distributing the radio equipment to the volunteers and briefed the team on where they needed to go for the day as well as duties. The antenna mast was also erected and connected to the radio gear in Martins Vito Bus.

Many of the people arrived there after, and at 9:00, the walk kicked off, with Hamnet volunteers at their respective points, ready for anything.

Comms were perfect, with regular radio and progress updates being made to JOCC and teams. The organiser, Helen, was also updated regularly on the progress of the walk via radio.

About 2 hours had passed and all the participants were safely back at the Cafe, without a single incident reported. Everybody reported back at the JOCC for a debrief, where Johan thanked all who assisted for the day. He also gave his word of thanks to Philip, his wife Tarryn (and little one) and to the students of Queens High for their involvement, pointing out how pleased he was with their radio operating skills.

Everyone assisted in gathering and packing the radio gear, after which greetings were exchanged and each person parting way.

Helen has indicated that she was very impressed with the service rendered by the members of Hamnet and other volunteers, and noted that the feedback she received from the participants were very positive!

Letters of thanks were also exchanged afterwards between Helen, the SPCA and Hamnet.

We look forward to next year, I have no doubt that the event will be even bigger and better.

Johan and Philip would like to thank the members of Hamnet as well as their wives and other volunteers for their support and dedication, this is what it means to serve our local community!

List of Hamnet Members and other amateurs involved for the day: